There will not be justice for Ashli Babbitt as decided by a court of law. On Wednesday, federal prosecutors dropped the case, as well as any potential charges.

“Federal prosecutors will not charge a police officer who shot and killed a woman as she climbed through the broken part of a door during the insurrection at the U.S. Capitol on Jan. 6,” the AP reported on Wednesday. 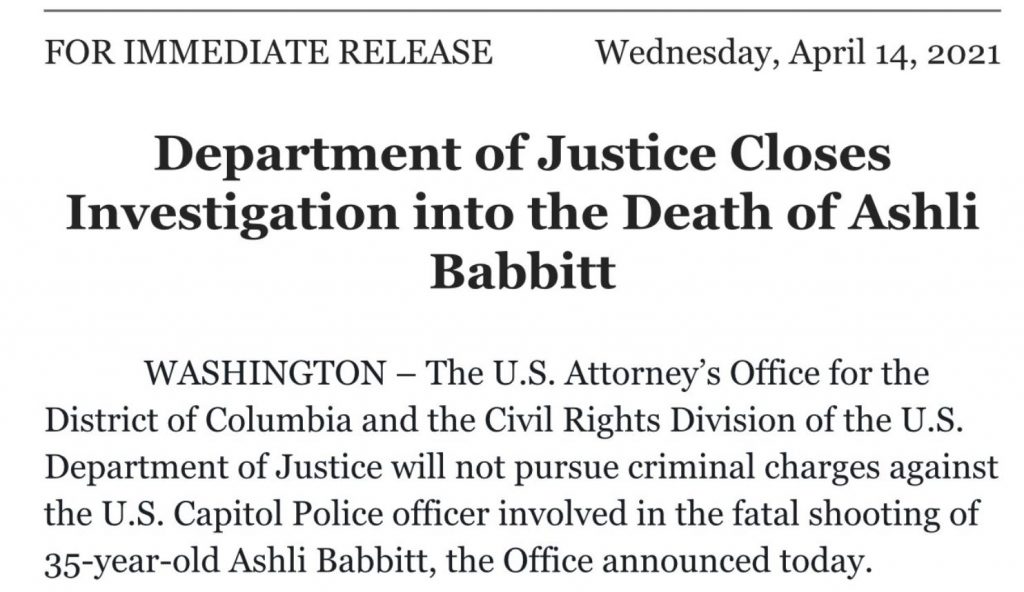 “Authorities had considered for months whether criminal charges were appropriate for the Capitol Police officer who fatally shot Ashli Babbitt, a 35-year-old Air Force veteran from San Diego,” the report continued. “The Justice Department’s decision, though expected, officially closes out the investigation.”

“Prosecutors said they had reviewed video of the shooting, along with statements from the officer involved and other officers and witnesses, examined physical evidence from the scene and reviewed the autopsy results,” the report added.

Ashli Babbitt’s death was recently determined to be a ‘homicide,’ according to the Chief Medical Examiner in the nation’s capitol. It is a designation for when one person is killed by another person or persons.

“The District of Columbia Office of the Chief Medical Examiner on Wednesday released the official cause of death for four people who died during the Jan. 6 Capitol riots, ruling that protester Ashli Babbitt’s manner of death was a homicide,” the Epoch Times reported.

“Chief Medical Examiner Dr. Francisco J. Diaz said the cause of death for Babbitt, 35, was a gunshot wound to the left anterior shoulder,” the report continued. “Her manner of death was ruled homicide, his office said.”

“Authorities previously said Babbitt was shot by a police officer as she allegedly attempted to climb through a door window inside the Capitol building,” the report went on. “The name of the officer has not been disclosed by local or federal authorities.”

Despite the extraordinary video, conveniently captured by an Antifa-supporting activist named John Sullivan, there have been very few attempts by major media outlets to dissect what really happened with the shooting of the Trump supporter.

The shooting incident is usually described in the most general of terms. An agitator, whom we now know is named Zachary Jordan Alam, smashed a window leading to an unsecured corridor within the Capitol building.

Zachary Alam, noticeably dressed in a furry hat, is handed a helmet by a fellow insurgent, whom we now know is a Texas winery owner named Christopher Ray Grider. Also involved is one Chad Barrett Jones of Kentucky, who is accused of breaking windows with a flagpole.

In the video, Alam backs the crowd up and smashes the window with the black helmet he is given. Babbitt crawls through the window, unarmed, but is shot by an unidentified police officer.

The New York Times reported more information about the unidentified shooter in January, who had not been charged for excessive force or for negligence after shooting the unarmed woman.

The lieutenant, a veteran officer, was regularly assigned to the Speaker’s Lobby, an enclosed hallway and waiting area in the inner sanctum of the Capitol where access is highly restricted. The lobby runs directly behind the House chamber and is lined with portraits of the House’s past leaders. It is bound by two sets of old wooden doors with windows, one on the Democratic side and one on the Republican side.

At about 2:15 p.m., the lieutenant heard on the radio that the Capitol had been breached, according to his account.

The Times continues to describe the video.

At 2:30 p.m., a crowd that included Ms. Babbitt streamed through the Capitol Rotunda and Statuary Hall. At that point, they were calm, even staying within a walkway defined by velvet ropes. But as they surged toward the north doors of the House, they grew aggressive, chanting, “Break it down.”

“Hey guys, I have a knife,” one person in the crowd can be heard saying.

The person who said “I have a knife,” unnamed in the NY Times article, is none other than John Sullivan, according to a federal affidavit submitted with his arrest warrant. The warrant states:

“Less than two minutes later, while officers are still at the doors and as others yell to break the glass windows in them with various objects, SULLIVAN can be heard saying, “Hey guys, I have a knife. I have a knife. Let me up.”

The image of the unnamed capitol officer holding aloft .40-caliber Glock handgun and pointing it at Babbitt, while Sullivan shouts repeatedly that “there is a gun,” is a harrowing one.

The entire incident was broken down by a Japanese analyst who had witnessed similar coordinated actions in her own country. In an interview with the Epoch Times, Masako Ganaha performs a compelling “analysis of the Ashli Babbitt shooting.”

If you haven’t watched the analysis yet, it will lead you to start asking the right questions about the death of Ashli Babbitt. This is far beyond what the major press is doing with this shooting incident.

“The secrecy has fueled Internet reports misidentifying the shooter as a Capitol Police special agent previously commended by President Trump for bravery,” Sperry reported. “The false rumors have triggered threats against the officer.”

“The officer who opened fire on Babbitt holds the rank of lieutenant and is a longtime veteran of the force who worked protective detail in the Speaker’s Lobby, a highly restricted area behind the House chamber, sources say. An African-American, he was put on paid administrative leave pending the outcome of an internal investigation led by the Metropolitan Police of the District of Columbia, which shares jurisdiction with the Capitol Police. The Justice Department is also involved in the inquiry.”

Babbitt was unarmed, but the unnamed officer warned her not to go into the secured area, a claim backed up by witnesses, according to the officer’s lawyer Mark Schamel.

“It’s a false narrative that he issued no verbal commands or warnings,” Schamel said. “He was screaming, ‘Stay back! Stay back! Don’t come in here!’”

The decision to shoot Ashli Babbitt has been chalked up as a “split second” decision; but one can see from the video that the woman was warned and the man held aloft his gun for at least fifteen seconds before shooting. This is not second-guessing the officer’s decision, but merely to point out that there is a discrepancy in the characterization of the shooting. It is also undeniable that Babbitt should not have proceeded to go into the area. However, this does not resolve questions about how the incident developed or concluded.

The New York Times and other media outlets have branded Babbitt as a “Q Anon” supporter, as if to dispel any public curiosity or even sympathy about the woman’s death.

The circumstances surrounding Babbitt’s death remain mysterious, as does the identity of the officer who shot her. It appears there will not be justice for Ashli Babbitt as decided by a court of law.