A former Florida Department of Health data manager has received ample media coverage over her claims that she was fired after she objected to the removal of certain data from the state’s public-facing coronavirus dashboard.

But the data in question has been available to the public since early May, and documents reported by The Associated Press Sunday show that Rebekah Jones was fired after she repeatedly overstepped her duties as a data manager despite being warned multiple times about her behavior.

A spokeswoman for Florida Gov. Ron Desantis, Helen Ferre, said May 19 that Jones was fired for insubordination, a rejection of her claims that she was fired for refusing to comply with orders to hide coronavirus data from the public.

“Rebekah Jones exhibited a repeated course of insubordination during her time with the department, including her unilateral decisions to modify the department’s COVID-19 dashboard without input or approval from the epidemiological team or her supervisors,” Ferre said. “The blatant disrespect for the professionals who were working around the clock to provide the important information for the COVID-19 website was harmful to the team.”

“I’ve asked the Department of Health to explain to me how someone would be allowed to be charged with that and continue on because this was many months ago,” DeSantis said. “I have a zero-tolerance policy for sexual harassment.”

In the documents obtained by the AP, Jones’s supervisor, Craig Curry, detailed multiple instances of Jones’s insubordination in an email to the Florida Department of Health’s human resources office on May 6. Curry was then instructed to begin the process of firing her.

Jones said in an email to the Daily Caller News Foundation that Curry’s message also praised the “fantastic work” she had done for the department.

AP reported that the documents show Jones received a warning from a supervisor on April 9 after she posted a message on a newspaper’s Facebook page about the state’s coronavirus dashboard, which she helped develop, without receiving approval to publicly discuss the resource. Jones received another warning two weeks later after she gave an extensive interview to a mapping company’s online magazine about the dashboard.

Jones’s supervisor later discovered that the fired data manager had released unauthorized charts in posts to a public blog that have since been taken down, according to the AP. The deleted post also contained “political commentary” from Jones. (RELATED: DeSantis Unloads On Media For Dire Florida Predictions)

Jones disputed in an email to the DCNF that the blog post contained any “political commentary” or that she cited any data that was not already available to the public. Jones did not respond when asked if she still had a copy of the blog post.

She also said she contacted Florida Department of Health Spokesman Alberto Moscoso “to receive permission to conduct interviews regarding the technology and process behind the dashboard.” Moscoso did not return a request for comment.

The final straw came May 15, when Jones vented in emails to researchers and other data recipients that she’d been reassigned, suggesting they should now doubt the data’s integrity.

The final straw for Jones came on May 15 when she informed researchers and other recipients of Florida’s coronavirus data in an email that she had been reassigned and suggested that the new data managers were manipulating the dashboard’s figures, the AP reported.

“As a word of caution, I would not expect the new team to continue the same level of accessibility and transparency that I made central to the process during the first two months. After all, my commitment to both is largely (arguably entirely) the reason I am no longer managing it,” Jones wrote in the email, according to the Tampa Bay Times. “They are making a lot of changes. I would advise being diligent in your respective uses of this data.” 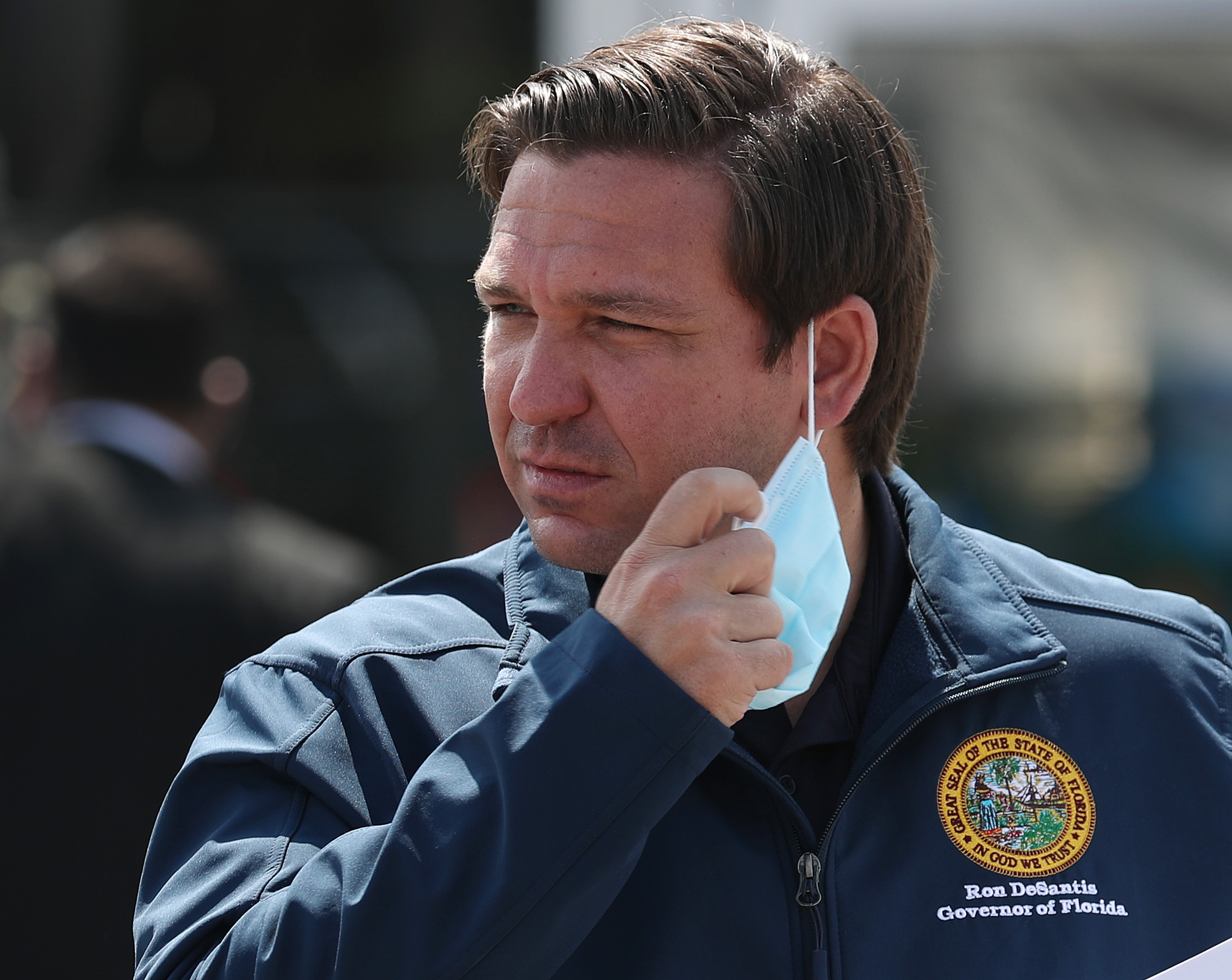 Florida Gov. Ron DeSantis takes his mask off as he prepares to speak during a press conference at the Hard Rock Stadium testing site on May 06, 2020, in Miami Gardens, Florida. (Joe Raedle/Getty Images)

Jones was reassigned on May 5 after she objected to a request the day prior from Dr. Carina Blackmore, the director for the Florida Division of Disease Control and Health Protection, to disable the ability to export data from the state’s coronavirus dashboard.

“Per Dr. Blackmore, disable the ability to export the data to files from the dashboard immediately. We need to ensure that dates (date fields) in all objects match their counterpart on the PDF line list published,” Jones’s supervisor, Curry, told her in an email just before 5 p.m. on May 4, according to emails obtained by the Tampa Bay Times.

Jones replied minutes later saying the request was the “wrong call,” but complied with the order. A little over an hour later Jones was instructed to re-enable the export feature, according to emails reported by the AP.

Jones has also expressed dissatisfaction over Heath Department officials taking down a particular data field that shows when coronavirus patients first remember obtaining symptoms of the virus, even if the date was prior to when they were tested positive for the disease.

That data, called the “EventDate” field, shows that dozens of Floridians reported having coronavirus symptoms in January. The data field was taken down for a roughly 36-hour period between May 4 and May 5, according to the Tampa Bay Times, and has been available to the public ever since.

“Event date is not the important field,” Deputy Secretary for Health Dr. Shamarial Roberson told the AP. “A case is deemed when you have that laboratory result as positive.”

Jones told CNN’s Chris Cuomo in an interview on Friday that she also objected to how Florida changed the way it reports positive coronavirus tests in late April. DeSantis announced the reporting change on April 24, saying it was a necessary change so that decision-makers can better assess testing trends.

As noted by The Capitolist, Jones’s claim that she was fired for objecting to the removal of coronavirus data received blanket coverage from legacy media, including from NPR, MSNBC, USA Today, the Tampa Bay Times, CNN and others.