A bipartisan group of House lawmakers delivered a letter to the Department of Veterans Affairs (VA) Monday demanding gravestones that bear swastikas and praise Adolf Hitler be removed from federal cemeteries.

Top lawmakers in the House Committee on Appropriations and its Subcommittee on Military Construction and Veteran Affairs wrote to the VA on Memorial Day demanding the department finally remove German prisoner-of-war gravestones that display swastikas and a messages that support for the leader of Nazi Germany.

“We are deeply troubled to learn that Department of Veterans Affairs Cemeteries in Texas and Utah contain graves of German prisoners of war with swastika-adorned headstones and messages honoring Hitler,” the the two Republican and two Democratic members of Congress wrote. 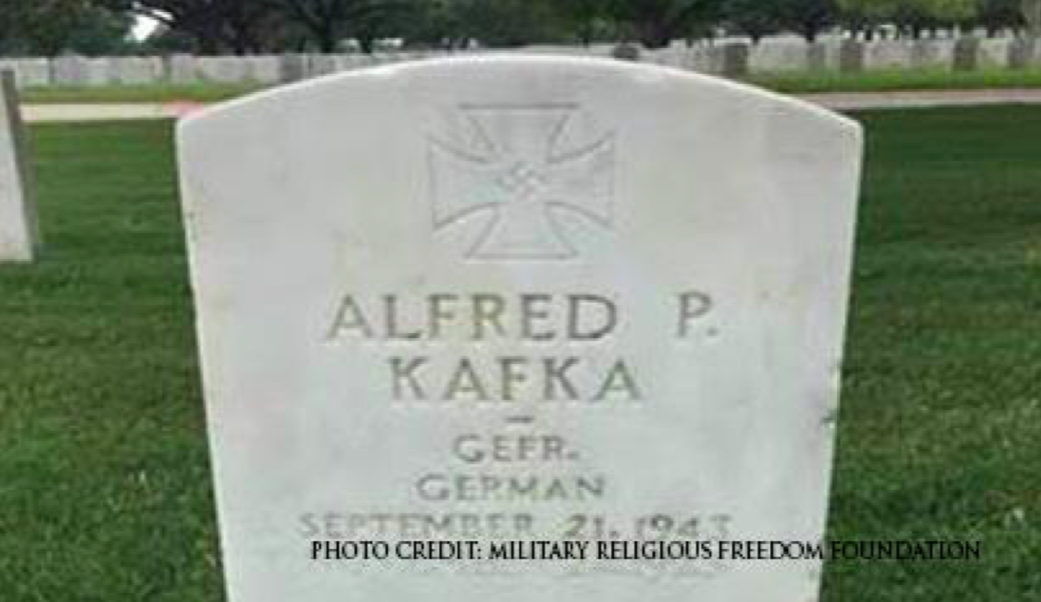 “Allowing these gravestones with symbols and messages of hatred, racism, intolerance, and genocide is especially offensive to all the veterans who risked, and often lost, their lives defending this country and our way of life,” the lawmakers said.

The letter comes after the leader of the Military Religious Freedom Foundation (MRFF), an activist group that advocates for the absolute separation of religion from military activities, called for the gravestones to be removed earlier this month, according to the Military Times. The group also demanded the VA apologize for allowing the markers to remain.

The controversy surrounds three grave sites at two cemeteries under the VA’s jurisdiction: One is the Fort Sam Houston National Cemetery in Texas and the other is the Fort Douglas Post Cemetery in Utah. The two cemeteries were used to bury numerous unclaimed remains of enemy combatants at the conclusion of World War II.

Three grave stones display a swastika in the center of an iron cross and a German inscription. The English translation of the text reads, “He died far from the Führer, people and fatherland,” the Military Times reported.

“From our perspective, this is just completely and totally wrong,” MRFF founder Mikey Weinstein said Monday to the Daily Caller News Foundation.

Weinstein recounted that he buried his own father in a VA national cemetery in Santa Fe, New Mexico. “I can tell you that if I see a Nazi headstone anywhere near my father’s headstone where we buried him,” he said, “I would’ve taken a sledgehammer to it.”

The VA said that the gravestones date back to the 1940s — before the department had control over the cemeteries. U.S. Army officials who managed the cemeteries at that time allowed the swastika and mentions of Hitler on the stones, according to the Military Times.

While there is bipartisan support for removing the controversial grave markers, the VA has resisted calls to remove the headstones, arguing that removing these grave markers would violate the National Historic Preservation Act of 1966. (RELATED: Iranian Government Releases Anti-Semitic ‘Final Solution’ Poster)

The law requires the federal government to protect historical resources for “the inspiration and benefit of present and future generations,” the lawmakers said.

In their Monday letter, the lawmakers said that “honoring Hitler on the headstones of German soldiers who took up arms against the United States is not in line with the law’s intent.”

“VA’s decision to leave the swastikas and messages honoring Hitler in place and ignore the calls to take them down is callous, irresponsible and unacceptable,” the lawmakers wrote, noting that their demands come at a time when documented anti-semitism has increased recent years in the U.S.

The VA did not immediately respond to a request for comment from the Daily Caller News Foundation.