Russian leader Vladimir Putin on Sunday signed a military document that declared the United States is the primary threat to Russian security.

It was the first update to Russia’s naval doctrine since 2015, when changes were made following Russia’s annexation of the Crimean peninsula from Ukraine.

Sunday was Navy Day, a national holiday established by Putin’s decree in 2017 celebrated with a huge parade of military vessels on the Neva river in St. Petersburg, a venue chosen to honor Tsar Peter the Great for establishing Russia as a major naval power.

“The Main Naval Parade includes the maritime, airborne and ground components to give a complete picture of the modern Russian Navy. In all, 47 combat ships, boats and submarines of Russia’s Northern, Pacific, Baltic and Black Sea Fleets are participating in the Main Naval Parade on the Neva River and in the Kronshtadt roadstead,” the state-run Tass news service reported.

The parade also included over 40 naval aircraft, including helicopters, transports, fighters, bombers, and about 3,500 personnel.

Before launching the naval parade with a congratulatory address to Russia’s sailors, Putin signed a 55-page document that laid out the strategic goals of the Russian Navy. The document said the primary threat faced by Russia is “the strategic policy of the USA to dominate the world’s oceans,” coupled with the North Atlantic Treaty Organization’s (NATO) advance on Russia’s land borders.

“Guided by this doctrine, the Russian Federation will firmly and resolutely defend its national interests in the world’s oceans, and having sufficient maritime power will guarantee their security and protection,” the new naval doctrine said. 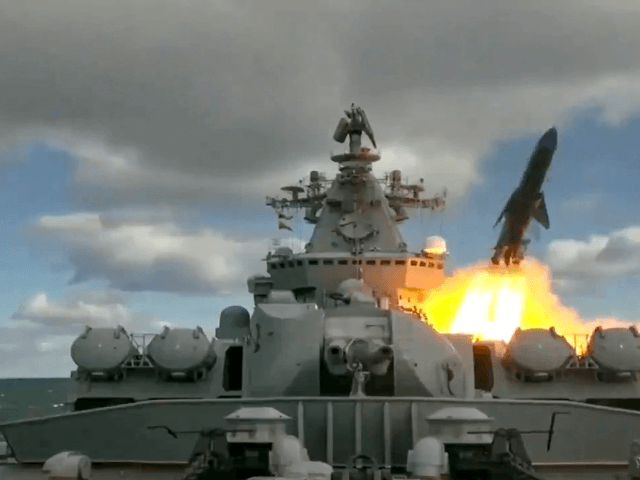 To this end, the document said Russia will seek greater strategic and naval cooperation with nations like Iran, Iraq, Saudi Arabia, and India – the latter two being major U.S. strategic partners.

The doctrine also urged Russia to consolidate its naval strength in the Black and Azov Seas following the invasion of Ukraine. It described the Arctic as an area of special concern for Russia, a focus that is making American planners nervous about the safety of U.S. and allied assets in that remote region.

Radio Free Europe (RFE) noted Putin listed several other bodies of water where Russia would protect its interests by “all means,” including the Okhotsk and Bering Seas and the Baltic and Kuril Straits. Russia has disputed maritime borders with other powers in several of these regions.

During his Navy Day speech, Putin promised Zircon hypersonic missiles would be delivered to Russian warships within the next few months. Putin frequently boasts these missiles move so fast that American anti-missile systems cannot stop them. He also boasts that Russia is leading the world in all aspects of hypersonic technology and consequently does have effective defenses against American hypersonic weapons.

The Russian military said it has successfully tested Zircon missiles several times this year and even claims to have deployed them twice in combat in Ukraine. The Pentagon declined to confirm whether Zircons have been used in Ukraine and said in any event they would not be a “game changer.”

Putin said on Navy Day that hypersonic missiles would give Russia the ability to “respond with lightning speed to all who decides to infringe on our sovereignty and freedom.”