When Nancy Pelosi engaged in a petty act of partisan outrage by tearing a copy of former President Trump’s State of the Union Address at a Joint Session of Congress in 2020, it instantly shone a spotlight onto the truly dark side of Madame Speaker.

Speaker Pelosi had literally torn up a copy of the speech on national television while standing right behind Donald Trump during the end of his presidential address. (You can watch it below.)

The Speaker’s symbolic fury captured the frustration of Democrats who were still outraged that Donald Trump had even been elected. It instantly gave the press a reason to pivot from the contents of the speech — the peace and prosperity created by his policies — to a contrived spectacle intended to deflect attention away from the president.

Vice President Pence accused Pelosi of planning the stunt ahead of time and condemned the action.

“I wasn’t sure if she was ripping up the speech or ripping up the Constitution,” Pence said. “To have her stand up and tear up that speech really dishonored the moment.”

Pence also called it a “new low” and an effort to make it “about her.” It turns out: He was right.

The “real reason” Pelosi tore up the speech is revealed in a new biography called “Madam Speaker: Nancy Pelosi and the Lessons of Power.” It contains Pelosi’s confession about why she had done it.

In the aftermath of Pelosi’s act, several publications uncritically toed the line that she had “no intention” of tearing up the speech beforehand. It wasn’t a calculated gesture, you see. It was a purely spontaneous act from a Speaker who was fed up with Trump’s purported mistruths.

“I had no intention of doing that when we went to the State of the Union,” Pelosi said in February 2020.

Christian Amanpour is one such journalist who interviewed the Speaker. Pelosi explained that she wanted to “get attention” on the “objectionable” parts of the “terrible” SOTU address.

Now, we know what one of those key “objectionable” parts was. It relates directly to honoring the late Rush Limbaugh.

Speaker Pelosi had indeed made small tears in her copy of the State of the Union Address throughout the speech, presumably marking the “objectionable” parts. Pelosi had apparently forgotten her pen. 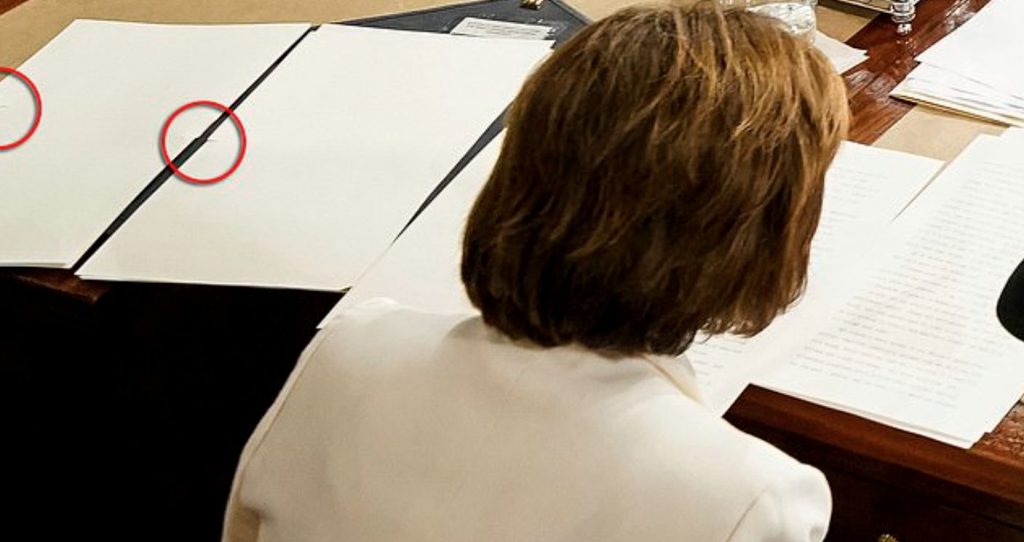 Then came the moment that set her over the top: The honoring of conservative talk radio host Rush Limbaugh with the Presidential Medal of Freedom.

“House Speaker Nancy Pelosi dramatically ripped up President Donald Trump‘s State of the Union speech last year because she had been promised a big announcement on healthcare or opioids,” reports the Daily Mail.

“Instead, Trump gave Rush Limbaugh the Presidential Medal of Freedom.”

“Oh, you’re going to be very happy about what he says tonight,” Pence reportedly said.

But Trump would instead brand Obamacare “socialist,” while only briefly mentioning the administration’s efforts to fight opioid addiction.

When Donald Trump pivoted to honoring Limbaugh, and as First Lady Melania Trump put the Presidential Medal of Freedom on his neck, “she felt her temperature rising,” Page says, based on her interview with Pelosi.

“I thought, ‘This page is so full of lies, I want to be able to come back to it,’” Pelosi told Page.

The Speaker continued making tiny tears in the speech. She had indeed forgotten her pen.

“I should have probably had a pen in the drawer, but I didn’t have a pen right there,” Pelosi said.

“She made a little tear in the next page to mark another assertion she saw as untrue,” Page wrotes. “And the next. By the time he was halfway through the speech, it occurred to her that she might just as well tear the whole thing in half, but she wasn’t ready to decide that yet.”

The Speaker revealed just how infuriated she was at the speech.

“My members were furious,” Pelosi said.”‘You could see steam coming out of the caucus. I’m not talking about the left wing; I’m talking about all of the members. They were so offended.”

“He used the Congress, the House chamber, as a reality-show set,” she ranted. “And then he had no reality in his speech. People were just furious.”

‘”It would be the most public display of disrespect in modern times from the leader of one branch of government to another, delivered almost face-to-face,” Page said.

But Speaker Pelosi told the author that she has no regrets – and she feels ‘liberated’ to have revealed the real reason she tore up her copy of the State of the Union address.

“I’m ever gracious and respectful of the office, if not the person,” Pelosi said of the presidency. “I’m not beyond that in partisanship or something, but not telling the truth, that was just beyond.”

It is not true, however, that she tore it up because of untruth. According to her own words, it is because she was not given the attention she thought that she deserved. She had been driven over the top by jealousy it was given instead to the late, great Rush Limbaugh.

You would have to imagine that Rush would have gotten a tremendous kick from that insight if he were still alive today. It is almost like you can hear him laughing about it in front of the Golden EIB microphone in the sky.