A Chinese Communist Party regulation signed by dictator Xi Jinping, whose many titles include chairmanship of the Central Military Commission (CMC), greatly expands the mandate of the People’s Liberation Army (PLA) to conduct “non-war military activities” – a benign-sounding term that happens to be very similar to the language Russian dictator Vladimir Putin employs to describe his invasion of Ukraine.

The South China Morning Post (SCMP) on Thursday quoted Chinese academics and military experts who scrambled to reassure the world that Xi did not give the PLA a new mandate for conducting offensive military operations beyond China’s borders:

“The CMC has the right to command the PLA to take any tasks at home, sometimes even bypassing domestic law,” Zeng said. “But when Chinese troops want to take part in non-war missions overseas, they should get a legal permit from both the UN Security Council Resolution and host countries.”

Zhou Chenming, a researcher from the Yuan Wang military science and technology think tank in Beijing, said the outline is based on a combination of the “military operations other than war” concept – created by the US in the 1990s – and the PLA’s own operational experiences of recent years.

These reassurances were somewhat undermined by Chinese state media coverage of the new policies, which supposedly enable the military to “defuse risks and challenges, tackle emergencies, protect the safety and property of the people, safeguard China’s sovereignty, security and development interests, as well as maintain global peace and regional stability.” None of that sounds like “non-war activity” conducted entirely within China’s borders by a passive PLA.

The SCMP’s correspondents specifically denied Xi was setting the legal stage for Chinese military aggression against Taiwan or disputed territories in the South China Sea – but they went on to explain that the legal stage is already set for such military actions, thanks to long-standing legislation such as China’s “Anti-Secession Law,” which gives the PLA all the authority it needs to attack Taiwan.

“The mainland doesn’t need to declare war when it’s going to bring Taiwan back. There is no peace across the Taiwan Strait. The civil war between the then-ruling party Kuomintang and the Communist party just halted in 1949, but no ceasefire was announced,” Beijing-based researcher Zhou Chenming explained, somewhat losing the plot about Communist China being a peace-loving nation that only wants to authorize its military to deliver more food to starving people.

Shanghai University law professor Ni Lexiong said Xi’s order was primarily meant to give the PLA more latitude to make war against its own people: “The Chinese Communist Party has accumulated experience in mobilizing troops to help tackle different crises at home in the past decades. The NWMA outline will remind some hostile forces that they will face severe consequences if they want to challenge the legitimacy of the party.” 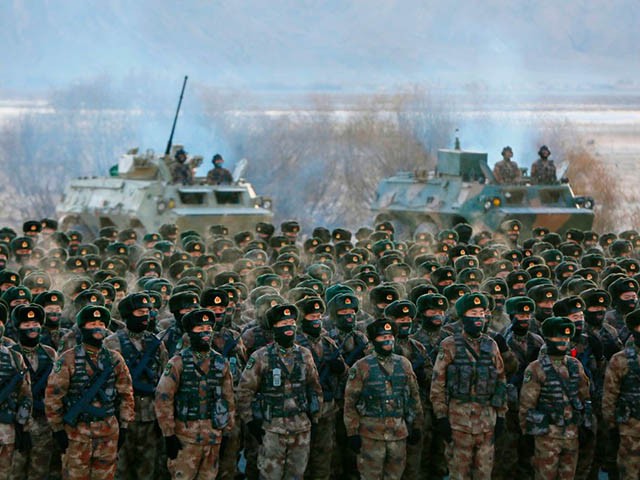 The SCMP suggested Xi might be establishing a legal framework for the PLA to take stronger action against foreign terrorists – like the Pakistani terrorists who killed a number of Chinese workers over the past year, or terrorists who might be planning attacks on Chinese interests in Afghanistan – but the SCMP’s correspondents ruled that out.

The Sydney Morning Herald (SMH) found no comfort in China’s assurances that it only wants to establish PLA programs for humanitarian assistance and “military operations other than war” similar to those created for the U.S. military 30 years ago. The Japanese government expressed similar concerns in a meeting with Australian ministers this week.

Given China’s tactics, rising ambitions in the Pacific and recent threats to Australian aircraft in the South China Sea, Australian government officials remain wary of the depth of recent Chinese overtures despite a meeting on Sunday between [Australian Defense Minister Richard] Marles and Chinese Defence Minster Wei Fenghe.

The SMH dug up a 2013 treatise on “non-war military activities” from the Chinese Academy of Military Sciences, which described numerous ways China could subvert enemy governments and increase its control over client states.

The proposal stressed that Chinese forces sent on “non-war” missions should be prepared to “place controls and limitations on foreign media’s news broadcasts” to suppress “slander” from “forces with ulterior motives.”

Radio Free Asia (RFA) noted Xi’s order took effect on Wednesday even though it has not been published in full.