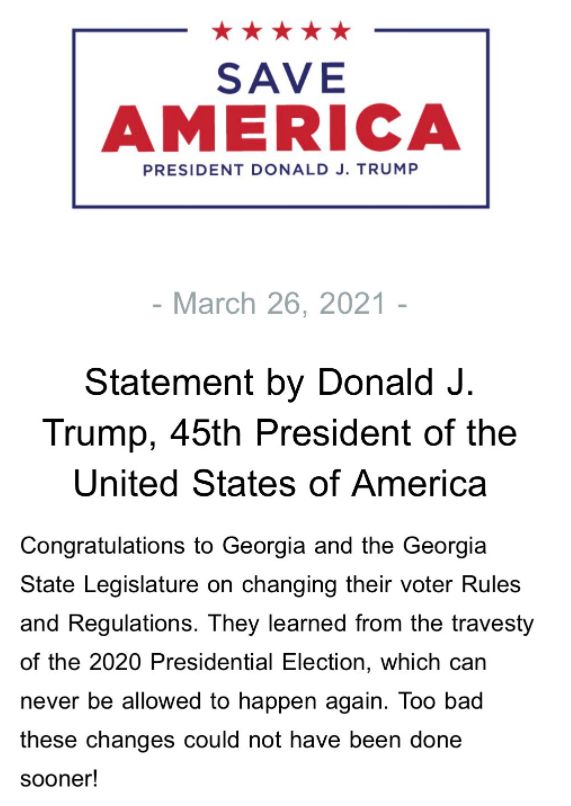 “Congratulations to Georgia and the Georgia State Legislature on changing their voter Rules and Regulations,” Trump said. “They learned from the travesty of the 2020 Presidential Election, which can never be allowed to happen again. Too bad these changes could not have been done sooner!”

On Thursday, Georgia Gov. Brian Kemp signed an election integrity law that would “cut the time period voters have to request absentee ballots; impose new identification requirements; make it easier for state officials to take over local elections boards; limit the use of ballot drop boxes; allow challenges to voting eligibility; and [r]eplace the elected secretary of state as the chair of the state election board,” Axios reported. It would also stop people from approaching others in a voting line, even to ‘offer water.’

The bill would also require voters to “include their driver’s license number, state ID number or a copy of photo ID when requesting an absentee ballot,” the AJC reported.

President Joe Biden lashed out at the Georgia election integrity measures signed into law by the state’s governor Brian Kemp on Thursday.

“It’s an atrocity,” Biden said. “The idea — if you want any indication that it has nothing to do with fairness, nothing to do with decency, they passed a law saying you can’t provide water for people standing in line while they’re waiting to vote. You don’t need anything else to know that this is nothing but punitive design to keep people from voting. You can’t provide water for people about to vote. Give me a break.”

“This is Jim Crow in the 21st Century. It must end,” Biden nonsensically added in a statement.

One Georgia Dem. Rep., Park Cannon, was so distraught she attempted to go into the governor’s signing ceremony, but was arrested by state police. Senator Ralph Warnock, who is up for re-election in 2022, also blasted the Georgia law.

Donald Trump was reported to have lost Georgia by fewer than 12,000 votes. It is safe to say Trump wouldn’t have lost if these commonsense voter integrity measures were in place.