U.S. families are struggling to make ends meet as multiple supply chain issues continue to affect many aspects of their lives amid record high gas prices and 41-year-high inflation.

Online news outlet the 19th highlighted one such case this week as an Indianapolis mother, Diamond Cotton, has struggled to find basic products she needs for her family. She has been forced to go from store to store to find tampons for her daughters, “who have both started menstruating and would need tampons to go swimming this summer,” according to the outlet.

At the same time, she is 15 weeks pregnant, and has to think about where the baby formula crisis will be months down the road, as her youngest son, now 4, was a premature baby and needed infant formula because she “couldn’t produce enough breastmilk to feed him then.”

“It is very hard — I am going to need formula, and when I come out of the hospital, I’m going to need more menstrual products,” Cotton told the outlet, as she also is struggling to find help with child care, partially due to high demand and limited staff. This is a serious concern for Cotton, as if she cannot find child care, she said, she will lose her job and with it the ability to provide for her children.

She’s managing all of that as she’s watching gas prices shoot up and purchasing groceries for her family from a list that each week grows more limited. Women, particularly those who are sole heads of households, are affected more than men by food inflation. Last month, the cost of groceries rose nearly 12 percent since May 2021 — the largest increase since 1979.

The takeaway for Cotton is pretty clear: “For women and children, there is not enough support,” she said.

Cotton is not the only mother facing these issues, as many of these concerns jumped to the forefront at the height of the baby formula crisis earlier this year, as mothers swapped stories of going from store to store in a desperate search to find nourishment for their infants.

“I have enough formula for two babies for 14 days,” Kayla Zurenko, a mom of four, told Fox News Digital in May. “Where am I going to find formula after that?”

Zurenko’s worries came as the Abbott Nutritional plant in Sturgis, Michigan, remained shut down due to concerns over a bacterial outbreak, though reportedly no links were found between the formula and sick infants. As a result, the plant finally reopened in June, only to shut down again this week due to flooding in the area. As a result, it will “likely delay production and distribution” of new products, the plant announced.

But now other product shortages are hitting the shelves, as Procter & Gamble confirmed this week that it is facing issues as well. 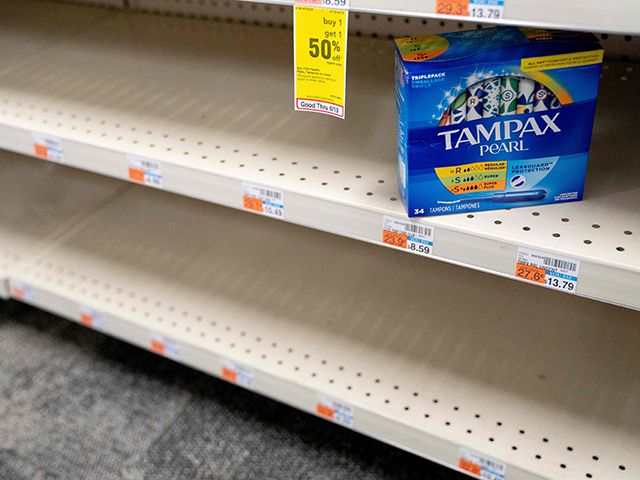 A box of Tampax Pearl tampons is seen on a shelf at a store in Washington, DC, on June 14, 2022. (STEFANI REYNOLDS/AFP via Getty Images)

“The Tampax team is producing tampons 24/7 to meet the increased demand for our products,” the company said in a statement, adding, “We are working with our retail partners to maximize availability, which has significantly increased over the last several months.”

All of this — Americans dealing with supply chain shortages, rising gas prices, and 41-year high inflation, with no relief in sight in President Biden’s America — comes as the midterm elections loom.