Donald Trump has released a new endorsement for an America First political candidate to run for Congress in Louisiana. 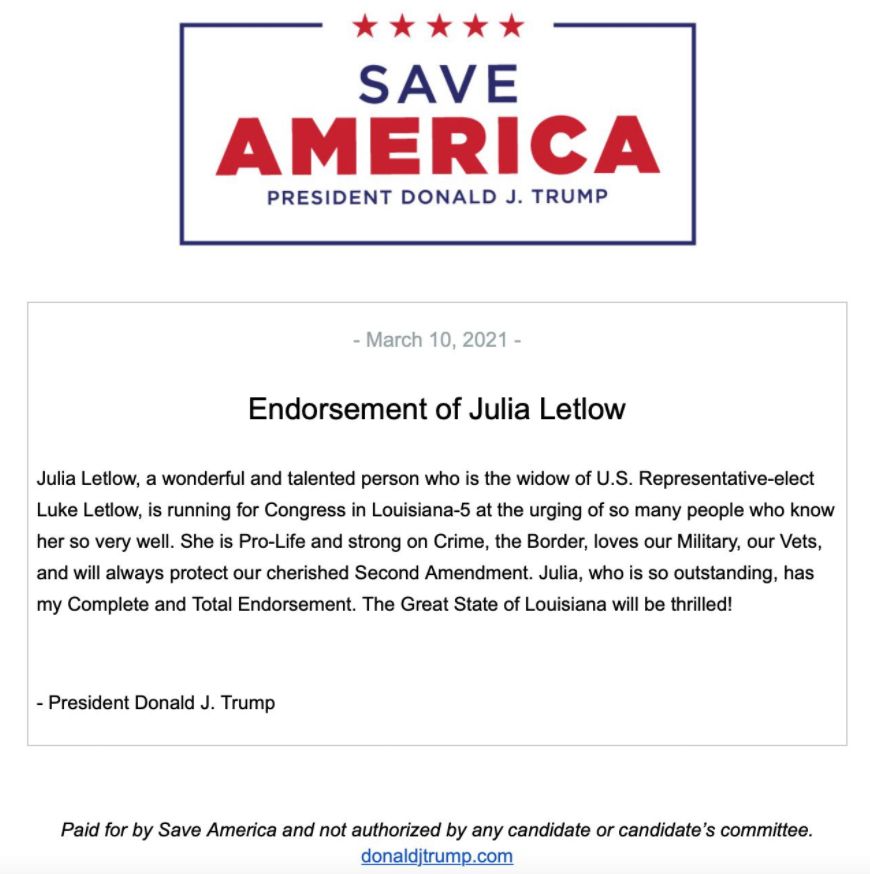 “Julia Letlow, a wonderful and talented person who is the widow of U.S. Representative-elect Luke Letlow, is running for Congress in Louisiana-5 at the urging of so many people who know her so very well,” Trump’s statement read.

“She is Pro-Life and strong on Crime, the Border, loves our Military, our Vets, and will always protect our cherished Second Amendment,” he added.

“Julia, who is so outstanding, has my Complete and Total Endorsement,” Trump continued. “The Great State of Louisiana will be thrilled!”

The candidate, Dr. Julia Letlow, responded with thanks on Twitter, along with the president’s ‘virtual tweet’ statement.

“It’s truly an honor to receive President Trump’s endorsement and I look forward to joining in the fight to save our country by putting America first!” Letlow replied.

Julia Letlow’s husband Luke tragically died before he could be sworn into office in the Louisiana-5 district.

Luke Letlow was set to be sworn in on January 3rd.

“The family appreciates the numerous prayers and support over the past days but asks for privacy during this difficult and unexpected time,” Andrew Bautsch, Luke Letlow’s spokesman, said in a statement. “A statement from the family along with funeral arrangements will be announced at a later time.”

Trump’s endorsement of Julia Letlow gives her family a chance to carry on Luke’s legacy and to bring hope to Louisianans seeking new leadership.